THE HISTORY OF THE PSYCHEDELIC TRANCE

If we try to understand the evolution of Psy-Trance it is necessary to make a time travel into the sixties, to a place in India called Goa. Searching for harmony with nature hippies in those times, tired of their life in post industrial society,often visited this place. These people celebrated psychedelic parties influenced by several music genres, going from Acid Rock to reggae. In this article we try to explain the evolution of what we now know as Psy-Trance.

In order to understand Psy-Trance we have to know the meaning ofthe single words Psychedelic and Trance:

Psychedelic derives from the Greek: ´Psike` (mind) and ´deloun` ( relative to the sensational). This way psike-deloun is a manifestation of spirit, mind, soul and of that what is able to effect our consciousness deeply.

Trance: defines an elevated state of conscience induced by meditation or by stimulation of our senses.

Psychedelic is often used in a wrong way because it is similar to the word ´psycho` which obviously has no positive meaning.

During the sixties the hippie movement surges in San Francisco, USA. The hippies started a culture, politically bold, against war which was expressed in Europe and North America. Its psychedelic style was inspired by hallucinogenic drugs ( LSD) and was based on fashion, graffic arts and music by the artist Janis Joplin, Love, Grateful Dead, Jefferson Airplane and Pink Floyd.

The hippies gathered radical protest against the system. They opposed to: materialism; conformism characterized by massified citizens; bureaucracy that destroys the fluency of life; the game of regulations and prohibitions supposed to guarantee freedom, but instead cutting them by the following dominant values: property, work, money, competition, class differences, racial segregation, ideological repression, etc….

The hippies extended through all developed countries ( USA, Canada, West Europe…) Many went to faraway islands in the Pacific Ocean, Mediterranean ( Ibiza), India, Thailand where they established communities which still exist today.

In the 70ties the first free parties are visited by hippies in the beaches at Goa(India). The beach of Anjuna was the most favourite place and the music went from Pink Floyd and Janis Joplin to the 80ies when these parties started to reach a global level. 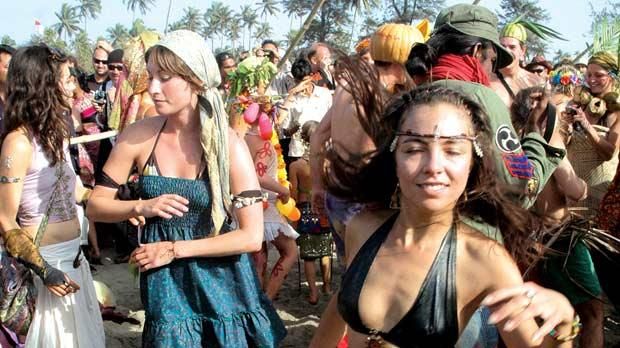 Considering the boom of acid-House these free parties start to reach Europe ( first Ibiza) in the years of86 to 87. Thousands of English people were attracted to these so called acid-parties, which were later known as the ´´summer of love“

The birth of a new culture: The Goa Trance

At the beginning of the 90ties goa-people knew the effects ´´acid“ music and started to create a new style. Goa Gil was the first playing this genre and is considered as the father of Goa-Trance.

The evolution of this ´´new sound“ is composed by the mixture of different musical components of those times like: New Beat, New Wave, Electro and Psychedelic Rock.

A part of this culture includes elements from Hinduism, Buddhism, Shamanism as an anchor to the crib of Trance: India.

The evolution of Psychedelic Trance: Today

What we now know as Psychedelic Trance directly comes from Goa and develops a unique and complex sound with specific properties. Psy-Trance has a powerful rhythmic base added with acoustic or electronic elements, often played live and spontaneous; also synthesized sounds from traditional instruments as gongs, guitars, drums, didgeridoos, etc.

Today you can say that the Trance culture has split up into two parts: The spiritual, maintained by the influences from India and the conscience of the whole as a part of the individual. What mainly characterizes Trance is the parties at which this music is played. In Trance culture these celebrations are a voyage through different states of mind where colours, movement and lights are stimulants.

The decoration of these parties appeal to the idols of totem cult, ancient Egypt, prehispanic cultures, Hinduism, psychedelic and cosmic understanding, being the mystical and proverbial sense this way. The places where these parties are celebrated generally are spiritual energetic locations like ruins or in nature at forests, beaches or others. These energetic fields are never present in common parties taking place in clubs or discos which makes natural locations the best option for goa and trance parties.

Psy-Trance celebrations are not only based on music and dance. It is more the sensational and cultural feeling present at each location which is given to following generations through celebrations composed by decorations, lights, Dj´s, music and so on. Further onPsy-Trance is creating an education based on tolerance and acceptance. Therefore organizing such an event can be understood as a ceremony or ritual where the primary element represents the harmony between the people involved. This way the positive energy will be transmitted to all participants and as a consequence higher levels of collective conscience are reached, making the festivity to a living and intelligent beeing in complete harmony with nature.