The hard pounding beats and deeply psychedelic soundscapes and samples of darkpsy have evolved throughout trance’s history, so let me take you on that journey.

The first hippies that arrived in Goa were drawn there for many reasons, the beautiful beaches, the low cost of living, the friendly locals, the Indian religious and spiritual practices and, one could add, the readily available Indian hashish which until the mid 70’s was legal. 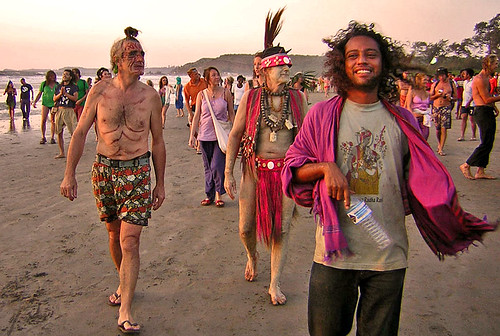 The first hippies arrived in Goa in the mid 60’s. One of the first was a hippy know as Eight Finger Eddie and it was he and his friends who started the first ‘Goa parties’ which at the time were no more than a group of friends sitting around a campfire on the beach playing acoustic guitar and dancing on hallucinogens. Perhaps it’s a ‘tribute’ to the original guitar driven parties of the beginning or perhaps just because it’s a great instrument, you can find many psytrance and darkpsy tracks with guitar driven parts in them.

During the 70’s the first Goa djs were generally playing psychedelic rock, bands such as Led Zeppelin, The Grateful Dead, Pink Floyd and The Doors. In ‘79 the beginnings of electro music could occasionally be heard in Goa in the form of tracks by Kraftwerk but it wasn’t until ’83 that djs Laurent and Fred Disko, closely followed by Goa Gil, who is now an icon of the darkpsy scene, began switching the Goa style over to electro which was now flooding out of Europe in the shape of New Order, Frontline Assembly, Front 242 etc. 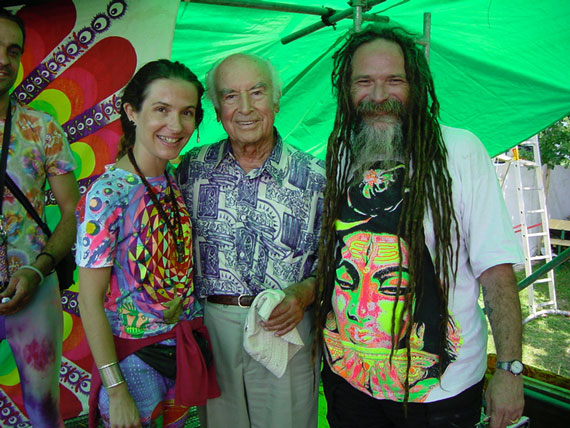 The hippies slowly took to these new sounds and eventually, due to the fact it was easier to dance to and nicer to trip to, they embraced the new futuristic, ‘space age’ sounds, preferring them to the classic wah-wah sound to which they had become so accustomed to.

The tracks were usually always remixed, removing the lyrics, looping the melodies and beats and generally manipulating the sounds in all manner of ways before the tracks were finally presented to the dancers as 100% Goa-style mixes. By ’85 all Goa music was electronic and people were constantly searching for new mind blowing music to remix into the new Goa-style.

It was of course impossible to buy this type of music in shops, it simply didn’t exist.(Even today it’s hard to find shops that sell psytrance and darkpsy, with most sales taking place on the net.) Although greatly disputed, the first ‘commercially’ released Goa trance tune came in ’88 and is accredited to KLF with ‘What time is love’. However, at the same time Goa music was being created by pioneers The Orb, Juno Reactor, Eat Static and also by The Infinity Project. 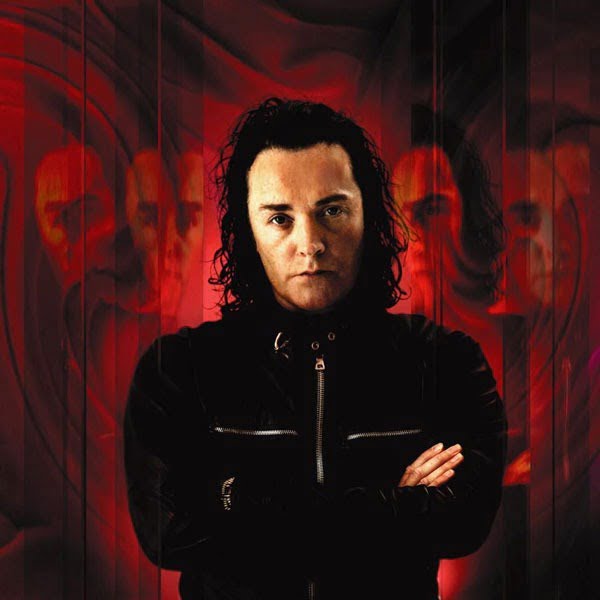 By ’92 the Goa trance scene had a pulse of it’s own though interestingly the term ‘Goa trance didn’t actually become the name tag of the genre until around ’94. New artists were springing up from all over the world and it was in this year that the first Goa trance festivals began, one of them, The Gaia festival took place in France and in Germany the most well known of festivals began, the now world famous and still running VooV experience in Germany. The music is generally full-on and morning psy at these particular festivals but there are often darkpsy artists who do sets during the night time hours. Darkpsy however has a growing number of dedicated festivals for those who want a few days of nothing but darkpsy music! 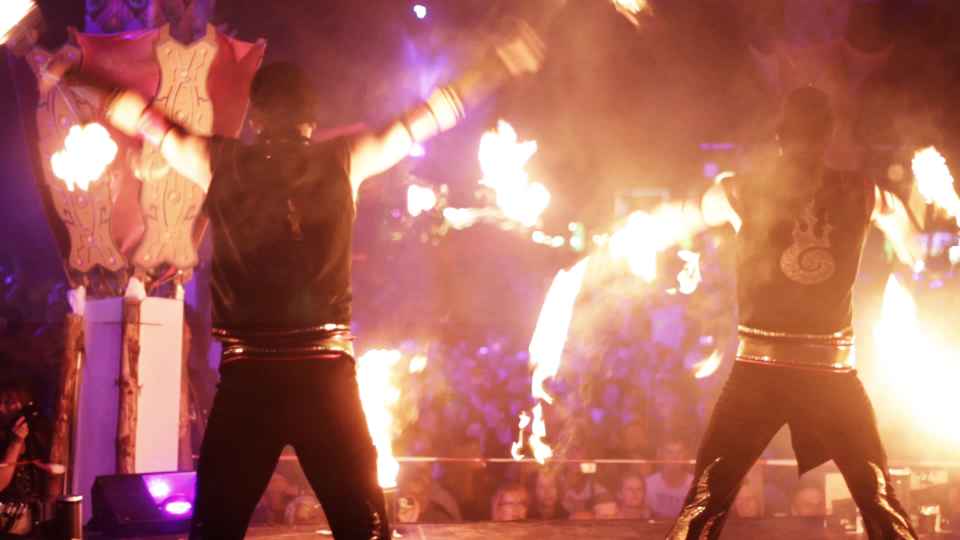 In ’93 the first 100% Goa trance album was released, Project 2 Trance, featuring tracks by Man With No Name and Hallucinogen to name just 2. Goa trance enjoyed its peak (commercially at least) between ’96-’97 with a fair bit of media attention and some huge names in the dj scene joining the movement. This hype however did not last long and once the attention had died down so did the music sales, resulting in the downfall of record labels, promotion networks and also some artists. This ‘commercial death of Goa trance’ was marked musically by Matsuri Productions in ’97 with the release of the compilation Let it RIP.

It is also important to mention the Israelis. Until ’88 India’s borders were closed to Israelis. When the borders were eventually opened many Israelis, after completion of their mandatory military service, travelled to India looking for a cheap, fun place to unwind. When they returned over the borders to Israel they took music and drugs back with them and in ’90 the first psychedelic ‘full moon gatherings’ on Nizanim’s beaches began. The music wasn’t darkpsy but compared to what had been available to them before it must have seemed very different and powerful.

With so much Goa music coming across the border into Israel and being played in the clubs, it provided a lot of inspiration to the younger generations of Israelis and soon new top quality producers were popping up on the scene, the most famous of which is Astral Projection.

However, the police clamped down hard on these psychedelic gatherings and with such a likely possibility of police intervention it seemed that a new formula was needed, one that would allow trancers to get maximum enjoyment from the party before it was shut down. This new formula became Nitzhonot, meaning victorious trance. This formula was basic, fast, and cheesy but therefore allowed party goers to have a good ‘freak out’ from the beginning of the party until it got stopped. No long building sets, just flat out, balls to the wall music.

In ’96 the music had changed so much from its Goa beginnings that the term Goa trance no longer seemed suitable and the new term of psychedelic trance, or psytrance for short, was born bringing with it a new style too. After years of this form of melodic music a sudden change occurred, the multi-layered melodies were stripped away and a darker and more repetitive from of music concentrated on rhythm and groove appeared. A landmark album of this change would be ‘98’s album Radio by X-Dream.

In ’02 however melodies became popular again, though now with less of the musical fuss and much better production. This new change heralded the beginning of full-on psytrance.

These days there are many sub-genres within the psytrance scene, minimal/progressive psy, morning psy, full-on psy, dark psy to name a few. There has also recently been quite a number of acts attempting to ‘return to the source’ and bring back the original goa trance sound, one of the newest labels which was only very recently started is Metapsychic records which is 100% dedicated to reviving the roots of the scene and promoting artists trying to recapture the original feeling of the music. 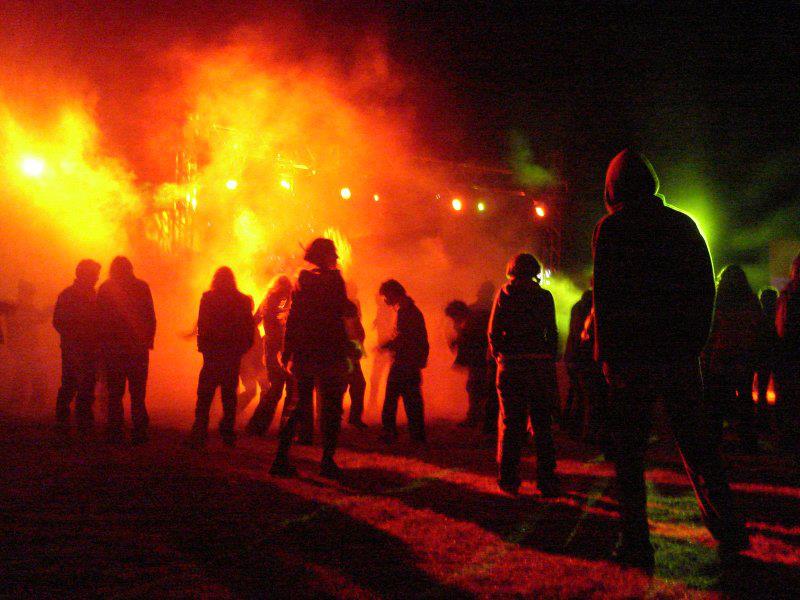 So you see, as with anything really, darkpsy didn’t just appear overnight, it’s the natural evolution of a form of music, it’s origins are found relatively far back but you can accurately pinpoint every evolutionary step.