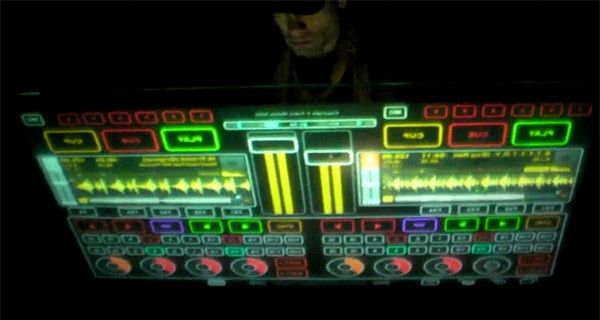 Not too long ago, CD DJs were sneered at by their vinyl playing colleagues: “A real DJ” those said “Plays from vinyl!. CDs are something for people who can not mix properly.” In the course of time the rapid technological development brought more and more sophisticated players for digital sound carriers on the one hand and more and more music productions on the other. And now the analogue traditionalist realized a certain disadvantage towards their digital colleagues: Up-to-dateness. A CDJ was able to present brand new tracks, wich had been mastered just few hours before they were played at the party. And there were more and more tracks that never even made it on vinyl but just came out on CD. Today there are so many different possibilities for digital DJs that they just blast the clasical term of DJing.

There is a really wicked gear now: The Eobody2 can transform analogue signals into MIDI data, Its a small box with 8 inputs that recieves gravity force, distance, pressure, shock, temperature, breath and other sensors. So you can use your hole body to control the sound and the visuals! – Gabriel Le Mar (Saafi Brothers-Thinner Records)

Of course, you can do really wicked and fantastic things just using two or three turntables and a mixer. But lets be honest: When was the last time you heard somebody scratching or just doing a simple backspin at a Trance party? But nevertheless that certain “vinyl feeling” still is a popular argument: Having your hands right on the record and so right on the music for sure enables you to have a miximum of control. Carrying a 40 pounds record case trough a crowded station while scurrying to get the next train on the way to your gigs is a minor appreciated facet of that vinyl feeling. In this world delivers a very elegant solution for this problem: The undeniable “hands-on-factor” and the pretty sexy look of the vinyl are combined with the space -and weight- saving digital storage technology. Systems like Final Scratch, Serato Scratch or Traktor Scracht allow you to play you vast collection of tracks, loops, samples, and own productions from real vinyl and to scratch it, if you want to or can … I wont deal with the discussion about the different sound quality of vinyl and digital sounds because this article has not the extent of the extent of the phone directory of London.

Digital technology changed my DJ performance approach. I always find new tracks online, get them faster, edit them, remix them, merge them, etc. Most of the time I use a computer and 2 CDJs: Playing on 4 channels gives a live refreshing and spacy feeling to the tracks. – Alex Tolstey (Tripple Distilled / Boshke Beats)

If the vinyl feeling is not that important for you, there are heaps of other interesting posibilities; Meanwhile very sophisticated hardware controllers allow you to control DJ software like: Traktor without using the mouse anymore. Big jog dials, knobs and faders feel exactly like you know like you know them from classical mixers and CD players. Furthermore there are lots of other exciting possibilities. You can control the flow of the sound visually on the screen beside listening to it, wich allows you to set loops and sound effects very precisely. So you can fill a break with some loop from another track for example and create kind of “live remix” by that The really comfortable controllers and software allow you to create your very own setup, according you have your personal preferences and style. In this way already today many digital DJs are definitely more creative and innovative then many so called live acts, wich just press the play button to trigger a pre-fabricated set and try to look cool, surrounded by expensive synthesizers wich aren’t even plugged.

The advantage of digital DJing is that you have no limits any more. With recent software you can visualize the music as well as you listen to it. And you dont have to carry heavy cases of music with you while you are travelling. The biggest advantage is that you can add production tools to run along with your DJ sets. – Dennis The Menace (Synergetic Records)

Apropos live act: Innovative new DJ performances do not limit to the possibilities of digital technology. Who has watched a real band with intruments won’t deny that there is a very special energy evolving from this kind of making music. And so there are also some interesting projects, in wich DJs collaborate witha drummer a fiddler, a saxophonist or some other musicians.

The interactive of this band-like constellation can not only be felt by the audience but also on the stage itself!.

Playing with two more musicians on the stage gives you kind of “band feeling” and usually it is much more fun and cooler show than ordinary DJ set! – DJ Slater (Tribal Vision Records)

What does a good party consist of? A tricky question. But I claim that the answer lies somewhere in the triangle between the sound, the visuals and the audience. Some very visionary DJ projects concentrate exactly on this point. For example Gabriel Le Mar can be watched with two notebooks on stage: One he uses for innovative sound manipulation, the other to create some suitable visuals and light effects. There is already some interesting gear for this new generation of so called DVJs around, like mixer and players that support audio as well as video signals. Mat Mushroom, goes the extra mile: Under the working tittle “Sensor DJ” he is currently developing a system wich processes the movement and reactions from the dancefloor and slips it in the music. This will become a new dimension of interaction because there will evolve an exiting correlation between the DJ, the sound, the visual and the audience.

Digitalis here to stay and the vinyl will survive the CD but on a very small market scal. On a good sound system a vinyl record still sounds, much better than an mp3 from a whatever soundcard. But our standars of listening to sound are changing currently anyway. – Mijk van Djik (Blufin/Gigolo)